This is a simplified version of the official documentation of Tensor Flow.

You might think of TensorFlow Core programs as consisting of two discrete sections:

What is a computation graph

A computational graph is an abstract concept, it is a series of TensorFlow operations arranged into a graph. The graph is composed of two types of objects.

Important: tf.Tensors do not have values, they are just handles to elements in the computation graph.

Another way to think about it:

TensorFlow programs work by first building a graph of tf.Tensor objects, detailing how each tensor is computed based on the other available tensors and then by running parts of this graph to achieve the desired results.

In practice, a computation graph is represented by tf.Graph(). A tf.Graph contains two relevant kinds of information:

Most TensorFlow programs start with a dataflow graph construction phase. In this phase, you invoke TensorFlow API functions that construct new tf.Operation (node) and tf.Tensor (edge) objects and add them to a tf.Graph instance.

However, TensorFlow provides a default graph that is an implicit argument to all API functions in the same context.

High-level APIs such as the tf.estimator.Estimator API manage the default graph on your behalf, and--for example--may create different graphs for training and evaluation.

For example c = tf.matmul(a, b) creates an Operation of type "MatMul" that takes tensors a and b as input, and produces c as output.

A tensor is a generalization of vectors and matrices to potentially higher dimensions. Internally, TensorFlow represents tensors as n-dimensional arrays of base datatypes.

When writing a TensorFlow program, the main object you manipulate and pass around is the tf.Tensor. A tf.Tensor object represents a partially defined computation that will eventually produce a value.

A tf.Tensor has the following properties:

The main types of Tensors are:

With the exception of tf.Variable, the value of a tensor is immutable, which means that in the context of a single execution tensors only have a single value. However, evaluating the same tensor twice can return different values.

A TensorFlow variable is the best way to represent shared, persistent state manipulated by your program.

Variables are manipulated via the tf.Variable class. A tf.Variable represents a tensor whose value can be changed by running ops on it.

Unlike tf.Tensor objects, a variable maintains state in the graph across multiple calls to run().

Internally, a tf.Variable stores a persistent tensor. Specific ops allow you to read and modify the values of this tensor. These modifications are visible across multiple tf.Sessions, so multiple workers can see the same values for atf.Variable.

Understanding variables is essential to doing deep learning with Tensorflow, because the parameters of your model fall into this category.

When a variable node is first created, it basically stores “null”, and any attempts to evaluate it will result in this exception. We can only evaluate a variable after putting a value into it first.

What's the difference between Tensor and Variable

Variable is basically a wrapper on Tensor that maintains state across multiple calls to run.

A Variable is a Tensor with additional capability and utility. You can specify a Variable as trainable (the default, actually), meaning that your optimizer will adjust it in an effort to minimize your cost function; you can specify where the Variable resides on a distributed system; you can easily save and restore Variables and graphs.

A placeholder is a promise to provide a value later, like a function argument.

Placeholders work for simple experiments, but Datasets are the preferred method of streaming data into a model.

A Dataset can be used to represent an input pipeline as a collection of elements (nested structures of tensors) and a "logical plan" of transformations that act on those elements.

For more details on Datasets and Iterators see: Importing Data.

Layers package together both the variables and the operations that act on them.

To apply a layer to an input, call the layer as if it were a function. For example:

The layer inspects its input to determine sizes for its internal variables. So here we must set the shape of the x placeholder so that the layer can build a weight matrix of the correct size.

A session encapsulates the state of the TensorFlow runtime, and runs TensorFlow operations. If a tf.Graph is like a .py file, a tf.Session is like the python executable.

An Estimator is TensorFlow's high-level representation of a complete model. It handles the details of initialization, logging, saving and restoring, and many other features so you can concentrate on your model.

An Estimator is any class derived from tf.estimator.Estimator. TensorFlow provides a collection of pre-made Estimators (for example, LinearRegressor) to implement common ML algorithms. Beyond those, you may write your own custom Estimators.

Think of feature columns as the intermediaries between raw data and Estimators. Feature columns are very rich, enabling you to transform a diverse range of raw data into formats that Estimators can use, allowing easy experimentation. 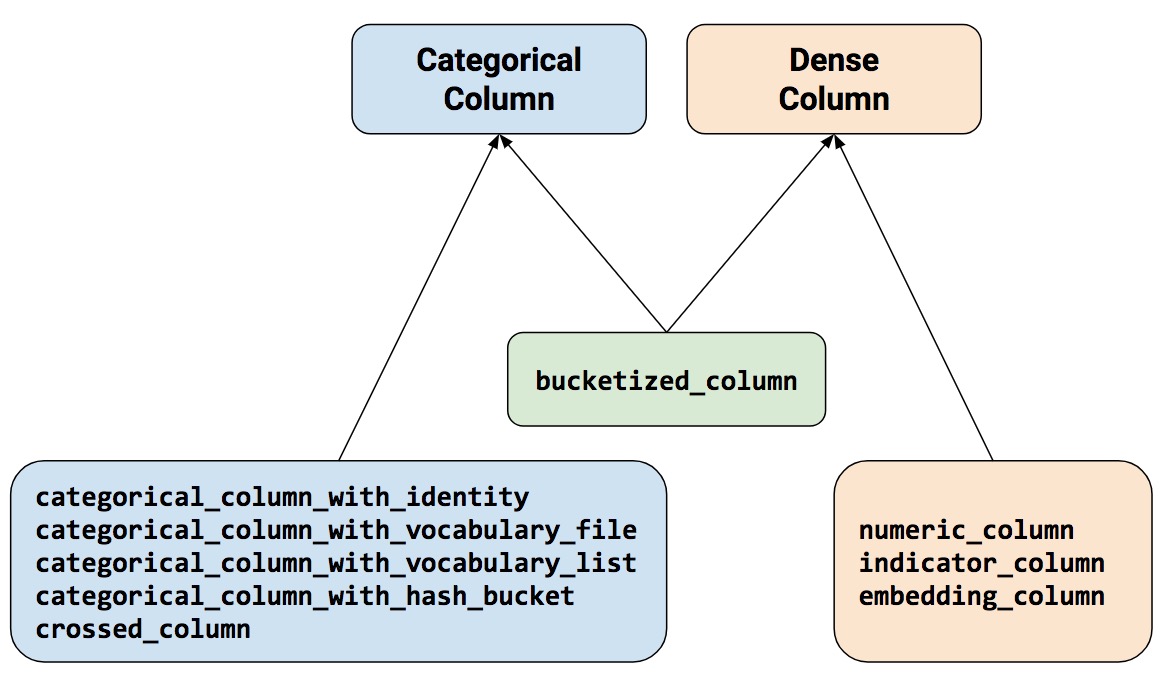 A blog about software development and financial investment